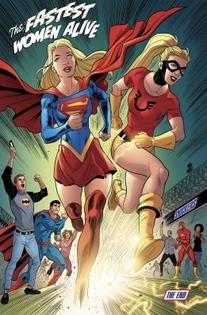 It’s the race of the millennium: Supergirl, the Woman of Steel and super-speedster,  Jesse Quick are racing around the world for a special charity event sponsored by "Snickers". As the announcer enumerates the rules (such as not flying) Superman and the Flash are in the stands watching proudly.

Kara and Jesse rush off. They race neck and neck across the Atlantic Ocean, Africa, China, the Pacific Ocean... helping people along the way before heading back into the stadium. When they return to the building they find the Parasite waiting for them. He has already drained everyone in the stadium, including Superman and Flash. Both heroines engage him, but taking him down proves to be a tough task.

Then Jesse notices a man who ate a Snickers and regained his strength. Kara and Jesse have an idea and instruct the man to hand out Snickers to the

Parasite and shove him into a hole. Then the group

dogpiles him. Once the Parasite is captured, Kara and

Review- This story was super cute seeing how the Snickers

Bars were the key to defeating Parasite. Also, this marks

Jesse's first appearance on the PrimeEarth (aka New 52/

So who do you think is the fastest woman? Is it Supergirl or

Jesse? You decide! Thanks for reading hot geeks, stay geeky! 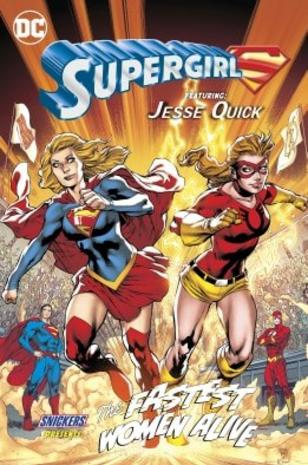