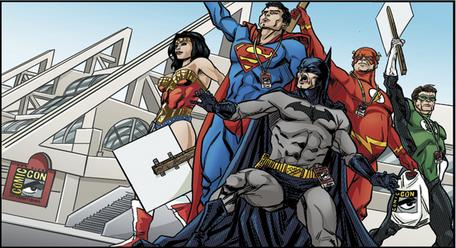 This is our little what if segment if we ran DC Comics / Warner Bros...

Salutation fellow hot geeks! We already know the general characters and history of the DC Universe. The one thing I do agree with Dan Didio is writing good stories (Hey online readers, this article would make a great drinking game cuz I'm going to say that phrase a lot. #FixedPointInTime). Keep the traditions that older readers enjoy and add a little side dish for the new readers. Now when DC created the New 52 I liked the idea of all the titles taking place in different timelines. I feel like them bringing all the titles to a current time hurt them. Rebirth is slowly trying to integrate characters from the Pre-New 52 DCU but it's still not working.

DC was at its best during the mid-70s-early 90s when it came to writing stories. Let's go back to the formula of telling good single to 2 part stories. Everyone today is writing unnecessary dragged out 6-12 part stories. I quit so many titles because of this. I go in comic shops and literally see customers put certain titles back on the wall and tell the retailer to add them when a new story arc starts. Comic shops are ordering fewer comics each issue because the stories are too long and bad. These writers need to stop trying to make their own groundbreaking Crisis On Infinite Earths / Watchmen. Just tell good single simple stories.

So if I ran DC I would change the comic series line-up, make a strict cohesive continuity, make it affordable, make it appeal to all fans old & new. Most importantly each story will be told within one to two issues and not restricted to one specific creative team. Example- say Scott Snyder & Jason Fabok is the creative team for Justice League. Mark Waid can come in and tell a story using Jason or another artist. I want to keep each series fresh and flowing where readers will always be looking forward to the next issue!

So in order to make this work, we'll create a new "crisis/event" (call it "Millennial Crisis") and these titles below will spin out from there. Enjoy.

These are the flagship titles of the DCU. Since these titles will be bi-weekly each issue will be $2.99!

Superman
-Head Superman title. This title should be very focused on the Man of Steel. What makes him Superman, his life with his family, going up against his greatest enemies and space adventures.

Batman
-Head Batman title. He's at the peak of his career. He's in full Bat God mode beating down supervillains and looking good.

Detective Comics
-Same as Action Comics. Keep the stories simple. Keep Batman grounded by solving crimes and murders. If something big is happening in Batman have some of the issues focus on someone else in Gotham like Red Robin, Batwoman, The Question, Detective Chimp or even someone from Gotham PD.

Aquaman
-Not too many people can do justice with the King of Atlantis. As important as Aquaman is if you don't have a solid writer this should only be a monthly title.
Recommended Creators- (W) Geoff Johns, Grant Morrison, Peter David

The Flash
-The Flash has always been a decent series for the most part. Definitely should focus on Barry Allen. Forensic officer and superhero. #FlashFacts
Recommended Creators- (W) Geoff Johns, Mark Waid, Joshua Williamson (A) Howard Porter, Tony Daniel

The Flash: The Fastest Man Alive
-Second Flash title makes sense for the sheer fact The Flash can be anywhere at any time and his adventures don't or shouldn't take too long.
Recommended Creators- (W) Geoff Johns, Mark Waid, Joshua Williamson  (A) Howard Porter, Tony Daniel

The Green Lantern
-This series should totally focus on Hal Jordan and his space adventures as an intergalactic patrol officer around Sector 2814. A lot of his stories mostly focused on Earth and not in space enough.

The Lantern Corps
-With 9 another Lantern Corps why not have a series dedicated to them. Each issue or 3 can be about a different Corps outside of Green. With the same logic as GL Corps title, the creative team can be rotated.

Justice League
-DC's strongest title! As always the iconic seven should be the core roster with a cast of support team members cause the League knows they can't be everywhere but with proper guidance, they can be. Taking the method from

Justice League of America
-This will be the grounded series. All the adventures will be focused on Earth and featuring more of the Earthbound founding members and the backup characters.

These comic series will be the extended DCU with rotating creative talents. These monthly titles will be $3.99 each!

Nightwing
-Everyone's favorite former Robin will be around for his own monthly series due to him being the leader of the Titans.

Green Arrow & Black Canary
-Green Arrow has always been a better character when he has someone to interact with so why not use his love interest Black Canary. This power couple can be the dynamic duo of crime-fighting we have been missing all these years.

Red Hood & The Outsiders
-Putting a modern spin on classic title Batman & The Outsider. This idea was also inspired by Arrow. With this new series, Red Hood will lead a group of misfits into a super team like no other. Team Roster--Red Hood, Batwoman, Ragman, Orphan, Azrael, Metamorpho, The Creeper, Vixen, and Huntress.

The Brave and The Bold
-The series every DC fan will collect. This comic will contain multiple stories by old, new and favorite DC talents. This is the comic you'll find characters you don't get to read about (Kamandi, The Atom, Animal Man, Bwana Beast &, etc), team-ups (Deadman & Booster Gold or Superman & Detective Chimp and so on) you dream about and characters you never have seen before. This will be a monthly series and the most expensive DC Comic title (probably $7.99-$9.99).

Supergirl and The Legion of Super-Heroes
-Another modern spin of a classic title. Not only do we tweak this title we tweak Supergirl's origin. She was sent to protect her cousin Kal-El but her pod was knocked off course frozen in time. Instead of waking up in the 21st century she actually wakes up in the 32nd century.
Recommended Creators- (W) Mark Waid & Geoff Johns (A) Gary Frank, David Finch, Tony Daniel

Gotham Girls
-Old title with a new spin on. Fuse between Birds of Prey and Gotham Sirens plus add all the other ladies of Gotham.

New Gods
-Jack Kirby's famous Fourth World will be a monthly series where different creators can tell stories about the good folks from New Genesis and Apokolips.

The Society Of Super-Villains
-Taking an old name and changing it up a bit. Instead of it being about the classic supervillain team this series will be about the many supervillains of DCU from their perspective. Tom King can write more stories about Kite-Man, Can I get a "fuck yeah"?

Multiversity
-Making a monthly series out of a book Grant Morrison created. This is for a creator who wants to go and explore the multiverse and create Elseworlds stories.

Series Set In The Past

Stories set in the past redefining the DCU!

Justice Society Of America
-Before there was Superman, Batman, and the Justice League there was the Justice Society! For the old school DC fans who love the classic JSA, we'll tell a new set of stories about the JSA during the 1950s. Team roster--Wonder Woman (Diana), The Flash (Revamp Jay's origin), The Sentinel, Wildcat, Dr Mid-Nite, Black Canary (Dinah mom), Hourman, Starman, Johnny Thunder, Sandman, Commander Steel, Guardian, Liberty Belle.

Superboy
-Relive new adventures of young Clark Kent as Superboy growing up to become the Man of Tomorrow.

Legends of the Dark Knight
-Same as Superboy, follow new stories about Batman (and Robin) early days of crime-fighting.

Sensational Comics
-Learn more about Wonder Woman's history as she lives throughout the decades on Man's World. Can totally Highlander up Wonder Woman.

Well, that's it for our new segment, "If I Ran DC Comics". Hope you enjoyed it and also send this to DC. Stay geeky, gang!