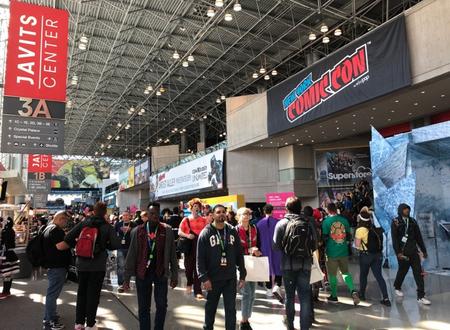 ​New York Comic Con 2019 was an unforgettable 4 days full of friends, fun and sore feet. Whether you were attending for panels, comics, exclusives or toys there was something there for everyone this year!

NYCC is always a little short on the public celebrity appearances but this year we were graced with the appearance of Ryan Reynolds, Margot Robbie, Paul Rudd, Rosario Dawson amongst others! There were lots of celebrities attending incognito as well, some of the Stranger Thingscast was spotted as well as other members of the Birds of Preycast!

​Image and Marvel duked it out with great comic variants for the convention as they have been over the past few months leading up to Spawn #300 and Absolute Carnage. McFarlane’s brainchild dazzled with a silver and a gold foil Spawn #300 Second Printing which caused pandemonium on the show floor throughout the weekend. Marvel also came heavy with Campbell and Mondo variants for House of X and Marvel Comics 1001. Scorpion Comics showed off their Clayton Crain Black Suit variant for Spider-Man #1 while Unknown Comics’ homage cover for Absolute Carnage: Immortal Hulk was really well received. It was a great few days to show that print isn’t dead, even if the market is being driven by variants.

If toys are more of your thing, NYCC was the place to be in October. Funko did their thing per usual, the biggest in-demand items of the con being the Pink Chrome Batman and Tony Stark Funko Pops along with the Toy Tokyo Ron English Freddy Funko. The sleeper from Funko was the exclusive Babe Ruth which has yet to drop anywhere else. Philippines based artist Quiccs had an insane exhibit with 100 customs of his super popular Teq63 designer toy as well as some extremely rare production pieces limited to 15-25 pieces. If you haven’t been, NYCC is the place to be. I promise you will not leave disappointed. As always give me a shout if you see me at an event or a con, I love to talk all things geek!