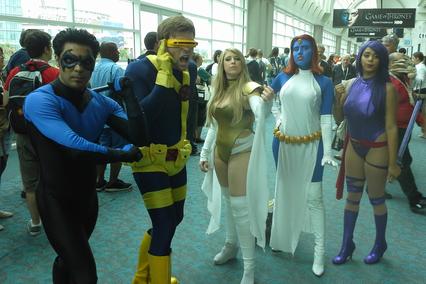 Salutation fellow hot geeks. Last week been pretty big for us because we attended SDCC and it was on our 3 years anniversary. Before I get

started I want to say this was Kayhettin's

and I first time at SDCC. We've been

getting coverage on SDCC for the last 3

years and whoever from our crew

(normally Kasea) always have a good

I were holding it down at Comic-Con.

Ridd1e gave away some gifts for our

Twilite Zone and IHOGeek for your 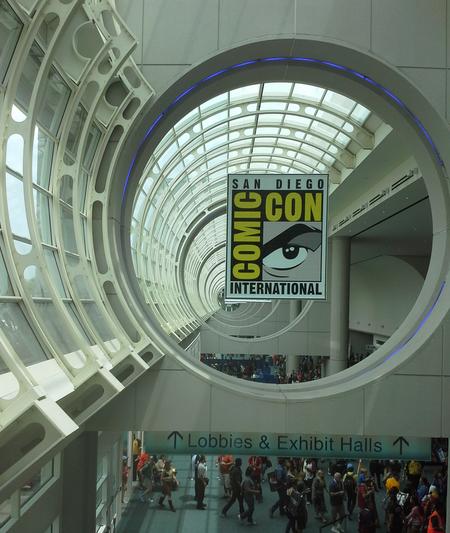 The party doesn't stop at the convention. Once you walk outside the convention center the San Diego area known as The Gaslamp has turned into a downtown geekpalooza. All the stores and restaurants have a comic book theme and specials for the con attendees. There were quite a few parties too such as Machinima and Assassin's Creed. If you have a lot of money and really like comics, toys & Hollywood sci-fi movies than San Diego Comic-Con is the place you want to be at. Hopefully, we'll attend next year.

​​Be sure to check out our Videos, Con Spotlight Interviews, and anniversary video. Down below is the link to our photo album. Further below is the Cosplay Girls of Comic-Con 2013, Elysiam Entertainment did for  The Syndicate Project. Be sure to like/follow us and League of Hot Geeks on Facebook and Twitter! Until next time, hot geeks!

What can I say about San Diego Comic-Con? It's considered to be one of the ultimate geek/nerd Heavens on Earth (DragonCon, Blizzcon, and PAX are the others). SDCC is a HEAVILY marketing convention. This is where all the top comic book writers and artists, actors, toys, and movies come to. Something new they apparently started this year was the Pavilion. Basically you stand in this line to get a ticket to get whatever SDCC Exclusive you're trying to purchase instead of waiting in line at each booth hoping you'll be able to purchase whatever items you seek. Some of the exclusives people were going after for were the

​I was amazed at how many panels I managed to walk right in on (literally). So many people talked about how you had to stand in line for Hall H. Psh I walked in on the panels for Joss Whedon, Man of Steel and the premiere of Justice League Flashpoint. The only thing I missed out of personal interest was the How I Met Your Mother panel and I missed the panel cuz I didn't know there was one </3. We managed to meet a lot of great people such as Orlando Jones, Philly D & the Sourcefed Nerd crew (Steve, Meg, and Trisha), Reckless Tortuga, Tom (The Syndicate Project), Kelly Hu, Walter E Jones, Sneaky Zebra,

George Perez and Frank Cho to name a few.​