The photo above is one of coolest and my favorite scene in the movie. This movie was so good. SHAZAM! fits so well in the DCEU and it gives me hope for the future DC Films. I was a little teary eye at a certain scene but the movie moment captured me. It had some minor flaws but nothing that will hurt seventh installment. This film has a lot of easter eggs, passable cameos,

a cool ending and two post credit scenes. So definitely go it on April 5th. I give SHAZAM! a 9.4 (near mint). Thank you for reading my semi-spoiler free review. Hit me up on Twitter so we can talk about it. Stay geeky gang. 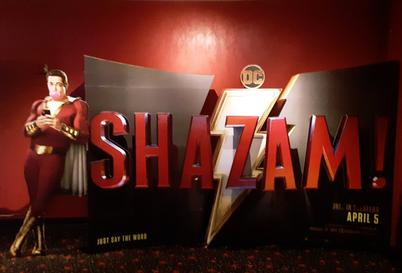 Produced by New Line Cinema and distributed by Warner Bros. Pictures, it is the seventh installment in the DC Extended Universe (DCEU). Based on Geoff JohnsNew 52 version, the film stars Asher Angel as Billy Batson, a teenage boy who can transform into an adult superhero, played by Zachary Levi.

In 1974, young Thaddeus Sivana (Mark Strong) was transported to the Rock of Eternity, a magical temple hidden in another dimension. He meets the ancient wizard Shazam, the last of the Council of Seven Wizards, who has spent centuries searching for a new champion who is "pure of heart" after the previous champion went mad, releasing the Seven Deadly Sins upon the world. Thaddeus is tempted by the Sins, entrapped in statues, and is deemed unworthy and banished back to Earth. He spent years trying to find a way back to the Rock of Eternity so he could obtain the power the Seven Sins tempted him with.

In present day, foster kid Billy Batson runs around Philly searching for his birth mother. With no luck of finding her yet, he is placed in a group home run by Victor and Rosa Vazquez with five other foster kids; Eugene Choi, Darla Dudley, Mary Bromfield, Pedro Peña, and Freddy Freeman, Billy's roommate and superhero enthusiast. Meanwhile, an adult Sivana, embittered by his rejection as a boy, discovers a way to return to the Rock of Eternity. There, he steals the Eye of Sin, becoming the Sins’ vessel and besting the Wizard before returning to Earth. In his last desperate attempt Shazam magically summons Billy and chose him as the new champion. By calling Shazam's name, Billy is transformed into an adult superhero endowed with the wizard's name. Shazam the Wizard turns to dust as he thanks Billy, leaving behind his staff. Returning home, Freddy helps Billy explore the extent of his newfound powers and get into the shenanigans that you saw in the trailer. I'll end the story here so you all can see for yourself.