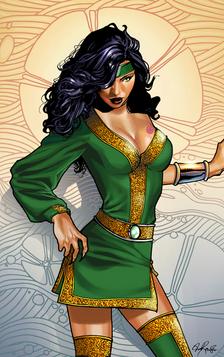 This week's Top 10 we're ranking the fighters from DC Comics. WARNING- All the characters we mentioned are from Pre-Flashpoint / New 52 for the simple fact a lot of the characters either lack, were greatly enhanced or doesn't exist Post New 52 / Rebirth. This ranking is only for non-super powered skilled hand-to-hand combatants, characters like Deathstroke and Wonder Woman are disqualified. I like to make this ranking a little more challenging, unlike other sites and experts. If you are curious where and what metahumans would rank at I can tell you Green Arrow (Connor Hawke) would be between #7-8, Deathstroke #4-5, and Wonder Woman, of course, would be #1 since she's the ultimate fighter in the DC Universe. Let's do this thing! 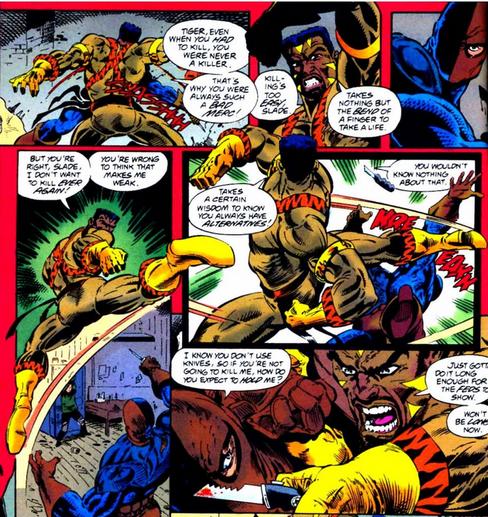 Although Richard Dragon possesses no superhuman abilities, his astounding martial arts feats often make him seem more than human. Dragon is proficient in the use of all martial arts weapons, though he prefers hand-to-hand combat. He possesses a talisman given to him by the O-Sensei, a claw carved from jade called The Dragon's Claw. This totem seems to mystically collect and direct Dragon's energies in times of greatest need, though it is probable that the Claw serves as a focusing point for Dragon's concentration and contains no real powers of its own [Who's Who: The Definitive Directory of the DC Universe #19]. Aikido, Karate, Kung Fu [Richard Dragon, Kung-Fu Fighter #1], Dragon Style Kung Fu, Leopard Style Kung Fu (Richard Dragon has mastered a technique which includes an attack known as the Leopard's Claw), Jiu-Jitsu, Judo, Muay Thai (Dragon has mastered and taught Muay Thai [Richard Dragon #2]), and Pencak Silat. 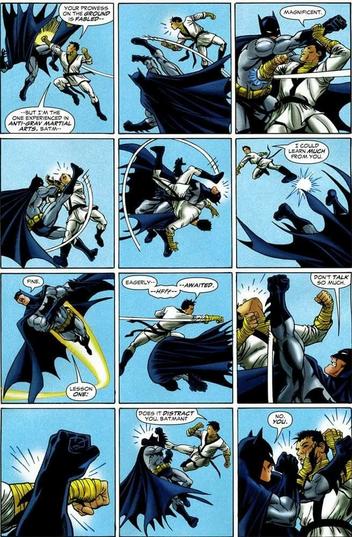 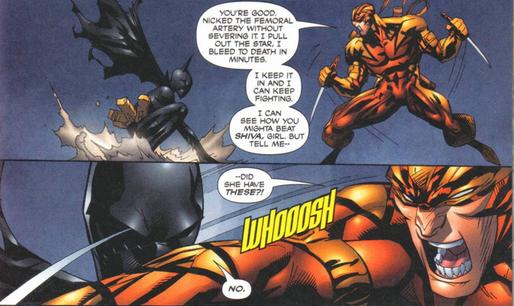 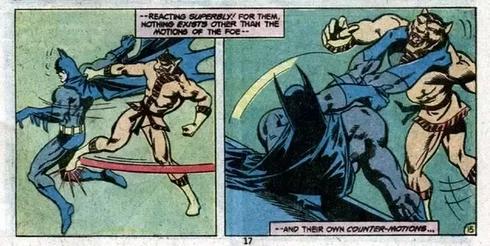 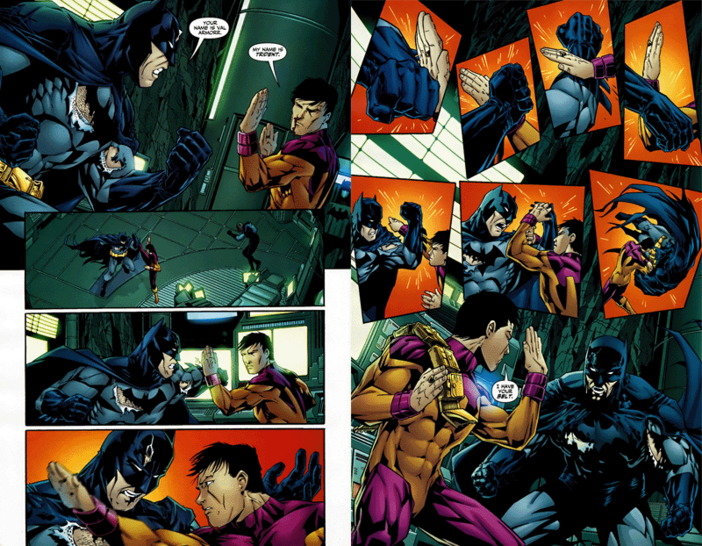 A "living weapon", Karate Kid is considered the greatest martial artist of all time (Yeah I have him at #7). Karate Kid is the master of every documented form of martial arts to have been developed up to the 31st century. He possesses the ability to sense the weakest spot in objects and people and his skill in hand-to-hand combat are seemingly superhuman, allowing him to simulate super-strength blows. He can severely damage extremely hard and strong materials — metals, stone, etc. — with a single blow. He occasionally fights Supergirl, though he is regularly beaten by her. This is presumably due to her training by the Amazons of Themyscira to learn to better control her super powers. As Val is male, he is denied Amazon training, making it one of the few skills he has not completely mastered. He fights Supergirl in an attempt to pick up some of those skills secondhand. Karate Kid combines his martial arts with the use of his Legion Flight Ring [Legion of Super-Heroes (Volume 3) #4]. He is classified as a Class 15 fighter (Batman is only Class 12, according to Superman, who Batman loved to prove wrong) [Justice League of America (Volume 2) #8]. 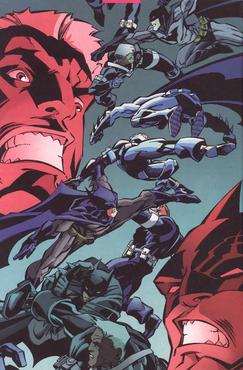 A former member of the League of Assassins, David Cain is one of the world's premier assassins and was one of the people who trained the young Bruce Wayne with the skills that he would use as Batman. Even though Bruce has, naturally, never used the murder techniques Cain demonstrated. When asked why he came to Cain in the first place, Batman replied: "Knowing how to kill doesn't mean you must kill." Cain trained Cassandra in every imaginable form of violence, from hand-to-hand combat to weapons and explosives. To further her skills, Cain never taught her how to speak; instead, physical movement became her language--she learned to read a person's body language as well and easily as other people can understand speech. This skill led Cassandra to be able to predict exactly what her opponents were going to do, sometimes before they knew it themselves. Cain is a highly trained human assassin, skilled in hundreds of martial art forms and assassin techniques such as pressure points, killing techniques and stealth to name a few.

Grayson is a hand to hand combat fighter and master several martial arts after studied under Batman [Nightwing Secret Files and Origins #1] and Richard Dragon [Richard Dragon #7]. His fighting style has an emphasis on Aikido and Eskrima. He is considered second only to Batman in fighting skill as he has been able to take down Arsenal [Justice League: The Rise of Arsenal #3], Ra's al Ghul [Nightwing V2 #152], Red Hood [Battle for the Cowl #3], Shrike [Nightwing V2 #58 & 91], and has stalemated the likes of Cassandra Cain [Batman & The Outsiders #8], Cheshire [Action Comics #614, 616-617], and Deathstroke [Nightwing V2 17-18 & Titans V2 29]. He is proficient in various martial arts such as: Boxing [Nightwing V2 #131], Eskrima, Hapkido [Batman #588], Stick Fighting, Taekwondo, & Kung Fu [Robin Year One #1], Judo, Capoeira, Aikido, Jujitsu, Karate, Ninjitsu, Sambo, & Savate [Robin Year One #3].

She is one of the most skilled martial artists on the planet. She has also been trained by Wildcat, who is formerly the Heavyweight Champion of the World, in the art of boxing, Muay Thai, capoeira, krav maga, and hapkido. She has also been trained in Dragon Style Kung Fu and pressure point fighting by Richard Dragon. Thanks to Wonder Woman, Dinah has been trained in Amazon martial arts but is strictly a novice in that kind of fighting style. Other styles she's shown skill in include Savate, Judo, Aikido, Jujitsu, Wing Chun, and Tae Kwon Do. Black Canary is such a good fighter Oracle thinks Dinah is better than Batman. Plus, Lady Shiva wanted Dinah as her apprentice. 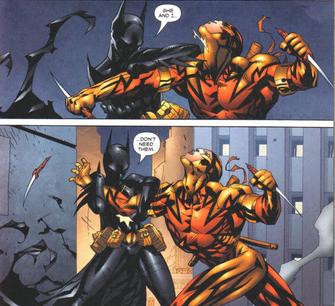 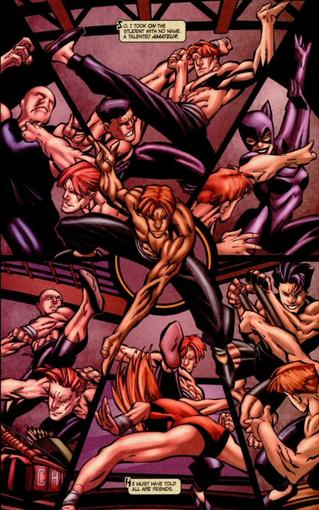 Lady Shiva is a deadly assassin and one of the prominent martial artists on the planet. She has combined many moves and elements from numerous martial arts including a few forgotten ones to create a combat form that matches her own strengths. Shiva is a master in Leopard Style Kung Fu, Dragon Style Kung Fu, Judo [Kung-Fu Fighter #6], Capoeira, Kokusho, Savate, Karate & Stick Fighting. Shiva was undefeated till her daughter Cassandra Cain beat her in battle. 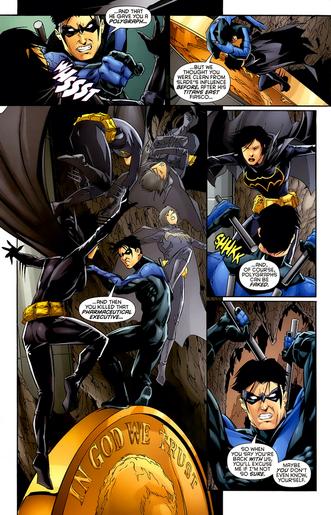 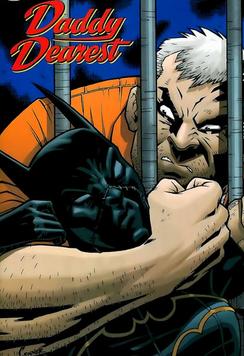 Cheshire excels at hand-to-hand combat, and is proficient in various acrobatic and martial arts skills. Her joints are extremely flexible, making her a skilled acrobat. Black Canary once called her "the second most deadly assassin in the world", only topped by Lady Shiva [Birds of Prey #63].

I know what you're thinking, "Wtf Batman is #6?!". Yes, he's #6 on our Top 10, unlike other comic sites and videos. Hear me out, Batman can be the other upcoming folks on the list if he cheats by using his gadgets and so on. As I said earlier this is based on physical skills and prowess. Bruce was trained in 127 styles of martial arts. He uses a fighting style that merges many of these styles, including Aikido, Boxing Tae Kwon Do, Judo, Muay Thai, Jujitsu, Kung Fu, Karate, Capoeira, Krav Maga, Yaw-Yan [Batman: The Ultimate Guide to the Dark Knight], and many others (Detective Comics #599 & Richard Dragon #7). Just to give you a heads up he's on par with the next 3 people but they have a slight edge over him.

Due to her lifelong training Cassandra has a master level knowledge of all fighting arts known and unknown and continues to learn with every new opponent she faces. She was trained by her father (David Cain), along with several other members of the League of Assassins, including Bronze Tiger, Merlyn and Alpha. Upon taking the mantle of Batgirl, she was trained further by Batman, Oracle, Black Canary, and Lady Shiva. She received supplementary instruction from Onyx. She has also invented her own styles (Dragon Style Kung Fu) and techniques ("Falling Leaf Technique" A nerve pinch invented by Chinese monks in the 16th Century. Cassandra and her father are the only people who know how to use it). 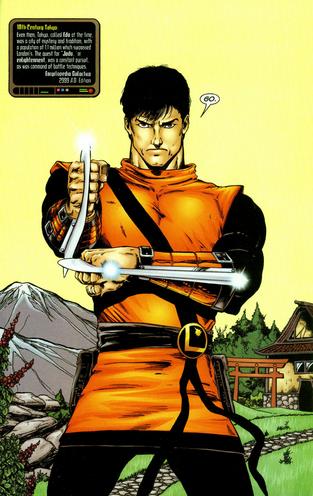 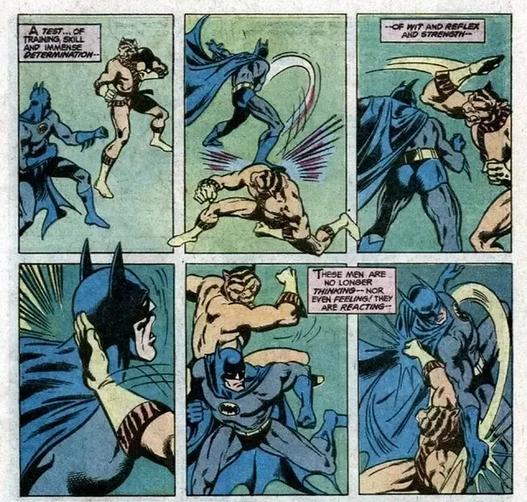 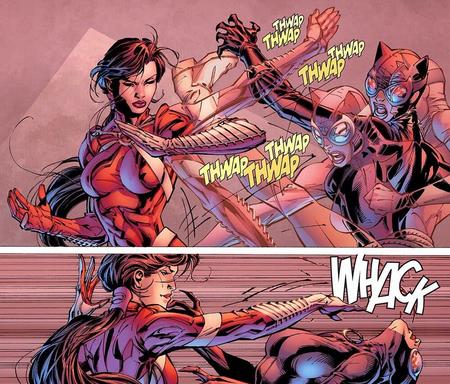 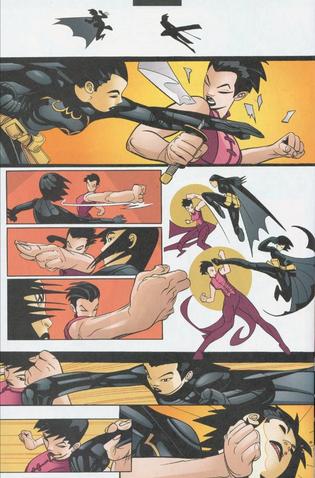 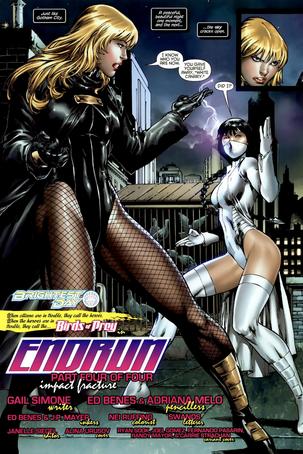