Coolest part is Queen Elizabeth II had to personally sign-off on the new stamp designs as she does with all new Royal Mail stamp releases.

“Royal Mail stamps celebrate British passions and we wanted to celebrate the British connection to Marvel Super Heroes,” adds Mark. “Marvel set up a UK publishing arm in the 1970s and launched Captain Britain in 1976. Some amazing British artists have worked on Marvel projects over the years, such as Alan Davis."

The Queen Personally Approved These       Marvel-Themed Stamps for the UK

To celebrate Marvel’s 80th birthday (it's really 51 years since Marvel was created in 1961) this year, the UK’s Royal Mail has unveiled 15 Marvel-themed stamps by legendary House of Ideas artist, Alan Davis, who’s worked with Marvel since the early 1980s. His most notably work in books such as EXCALIBUR, CAPTAIN BRITAIN, THE UNCANNY X-MEN, and THANOS: THE INFINITY CONFLICT.

Marvel.com chatted with Mark Liversidge of the Royal Mail to learn more about how this special collection came to be.

"We knew of Alan Davis’ reputation and long association with Marvel (having illustrated CAPTAIN BRITAIN for a number of years as well as many of the other heroes),” Liversidge tells Marvel.com. “We used the British design company Interabang to develop the overall design concept and investigate the best compositions for each character to work at the very small size of a stamp. Then Alan was briefed about each hero, to represent in a classic pose.” 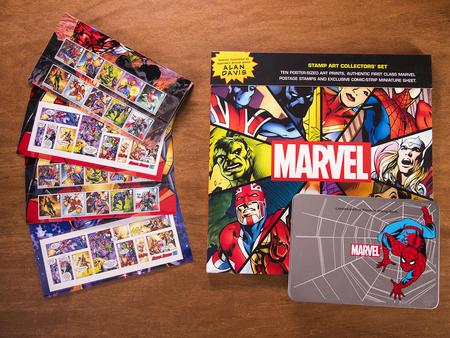 True Believers around the world can order these Super Hero stamps for their collections right here! Well, that's all for today. For more geeky news follow Geekpin Entertainment on Facebook, Twitter and Instagram. Thank you for reading and stay geeky, gang!

Davis also did an entire comic strip (titled MARVEL HEROES UK) of five panels that have been transformed into stamps. Each story has to do with the characters facing off against the Mad Titan himself, Thanos!