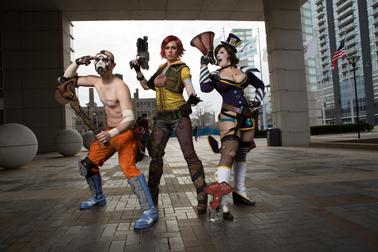 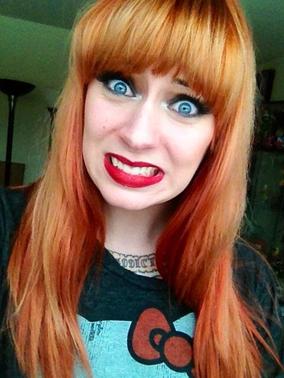 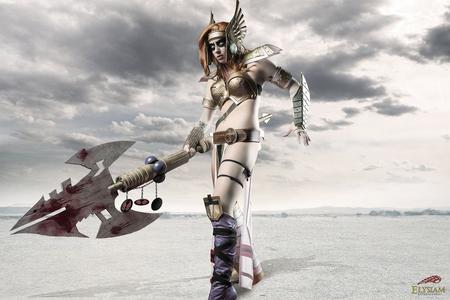 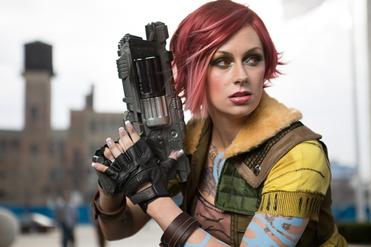 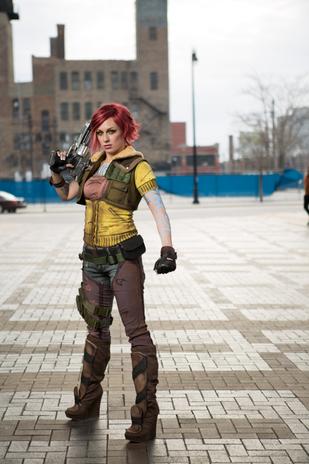 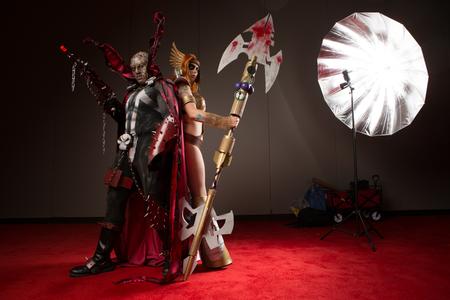 ​The Geekpin: Hello Ms. Nicholson how are you?
Kearstin Nicholson:I'm fantastic, hungry and exhausted! Thank you for asking!

The Geekpin: What made you want to use your real name for the cosplay world?
Kearstin Nicholson: I've always worked in employment that did not need to be concerned with my personal life. Even when I was going to college, I was working towards a field that did not mind either (but I didn't finish college anyway). Instead, I went straight into the corporate workforce and each job I've had it didn't matter. So, when I decided to change my mind on having a stage name when I was 18, it has been much easier to be remembered as nobody really has my name. I even have

Kearstin.com. Sure, pronunciation and spelling from others can be tricky at times, but, Google Kearstin and I DOMINATE IT! Which from a marketing standpoint, is exactly what I want.

The Geekpin: Describe yourself Twitter style (aka in 180 characters).
Kearstin Nicholson: Bold and daring woman who isn't afraid to take steps in life to be successful. Passionate and outgoing. Whilst NSFW and crude at times, I'm still professional and driven. Plus, I'm hilarious.

The Geekpin: I love practically all of your cosplays. How do you decide on your cosplays?
Kearstin Nicholson: I never choose a character based on "I relate to it". I choose based on attraction to the character. She's complicated, she's a warrior, she's sexy, she's confident. I also tend to choose more obscure characters, just because of the interest I have within the "nerdy" things I'm into. The universes in everything I read, play, watch are ginormous and the options are ridiculous. Sure, at times I will choose things that are "popular", but, case in point: Jean Grey. Everybody knows who she is. But do they know every suit and rendition? Not as often. It's challenging to portray the more obscure. I think it also displays your "knowledge" of the more "in dept" material you're into. ​​

The Geekpin: What other conventions will you be attending this year?
Kearstin Nicholson: My convention attendance is almost always tentative as I change my mind a lot. I also am a homeowner with Mike Prost (my boyfriend), so finances for that come first. I'm rarely provided as guest for conventions, and if anything, it's just a badge. So, everything is out of my pocket! As of right now, Acen (May 17-19) is in the cards, as well as Wizard World Chicago and Dragoncon. What's tentative: Superman Celebration (only if SDCC happens, which is VERY uncertain right now), GMX and NYCC.

The Geekpin:C2E2 is pretty much your

hometown con. Tell us a little about it?
Kearstin Nicholson: Wizard World

Chicago and Acen were the primary

Chicago conventions I would go to.

Once C2E2 arrived for us 4 years back,

it was absolutely refreshing. The

attendance, the vendors, the panels,

the celebrities; it's all there. While I'm

not entirely a huge fan of the location

of the convention, it's still absolutely

fun to go to. I even worked C2E2 staff

night activities! Many of us, especially

costumers, want C2E2 to be "our

Dragoncon", and that means more

things to do at night! Drunk endeavors!

I'm hoping to take part of the process

I recommend this convention to anybody

coming in asking about Chicago

conventions. While the others are fun,

The Geekpin: Is there anyone who you

admire or motivates you in your work?
Kearstin Nicholson: Always! There are

many people who inspire and motivate

me in different ways. Whether it's

fitness, obscurity, and personality. To name

a few (not all! and I'm sorry if I missed some

of you! you know who you are!) BelleChere,

Ridd1e, God Save the Queen Fashions,

The House of Canney, Jessica Nigri,

Jessica Nova (and her Superman Jonathan!),

The Geekpin: How was your experience

being photographed by Kayhettin (aka

a model normally, and as a costumer, just as

fast. He is prompt, quick, professional and

outgoing. Loved it. I'm also happy he doesn't take 300 photos. I'm glad I got to work with him TWICE over this last weekend at C2E2! I hope to work with him more. He's got phenomenal potential!​​

The Geekpin:Angela vs Wonder Woman?
Kearstin Nicholson: That's a toughy! If we were to eliminate all weapons, to make it a fair fight; I think it'd be a rough landing to the end, with Wonder Woman coming out on top. If weapons were allowed, I think that Angela would have an advantage considering she's got the power of Heaven on her side. But even still, the fight would last a while that's for sure!

The Geekpin: Indeed. So where can the folks online find you at?
Kearstin Nicholson: Everywhere LOL! Kearstin.com right now brings you to my Facebook Like page until I relaunch my personal, but if you type in Kearstin or iKearstin into pretty much everything; you'll find me. I live on the internet!

The Geekpin: Before we wrap things up is there anything you want to say or ask?
Kearstin Nicholson: Ask? Nah. Say? Absolutely! If you want to take a picture of my ass at a convention, just ask me. The coffee is hot! LOL!