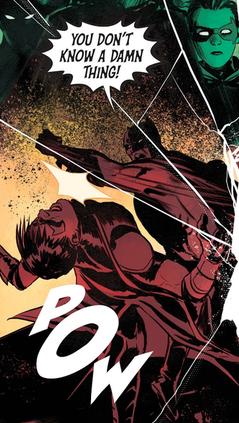 Salutation fellow hot geeks! So word on the street comic fans aren't happy about Batman punching Tim Drake aka Robin / Red Robin in the kisser (and the story just being confusing) in Batman #71.

It's not the first time ol' Bats hit a Robin. We all know the famous Batman slaps Robin meme. Punching Robins is only a small percentage of people Batman hits on the reg. Most of them are criminals and occasionally he might throw a punch or 3 at fellow Justice Leaguers. ​

See folks, Batman hitting Robin is not out of character for those who think he lost his mind (which he kinda did so far). Other than that I really just wanted to talk about Batman hitting people no matter who it was. Well, thank you for reading this slow news day article. See ya around hot geeks.

Luckily for evildoers and allies, Batman doesn't stop there. Batman punches women and animals. Batman does not discriminate when it comes to his fist as you see below. PETA will probably petition against DC after reading this (no they won't).