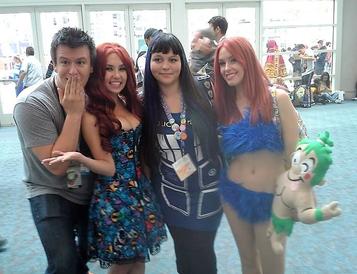 This section is dedicated to awesome geek related sites and affiliations.

Elysiam Ent and the official photographer of Cosplay & Gaming Hollywood.

Trisha Hershberger- A down to Earth all around geekette who is a Model, Actress, Online Host, Tech & Gadget Expert, Producer, Cosplayer for Funsies. She's best known from the blockbuster Youtube show, Sourcefed & Sourcefed Nerd. She's currently a host on Geek & Sundry. Be sure to check out her Youtube channel where she tells The Naked Truth.

Super Podcasto Magnifico!- An awesome podcast that captures their rants and raves on all things geek and pop culture.

Sub-Cultured- Starting out in 2010 under the name “International House of Geek,” Sub Cultured has since matured into a fun opinion site about all things geeky, from the underground to the mainstream issues surrounding us.

Bat in the Sun- Bat in the Sun is an independent self-contained film and music production company. Most known for Super Power Beat Down & Ninjak VS The Valiant Universe.

Legend of Micah-Co-Founder of Beat Down Boogie. Micah Moore is an experienced content creator and purveyor of spectacle. He's best known for his work on the DragonCon coverage videos and Mario Warfare.

Beat Down Boogie- Beat Down Boogie is making fun content for a pop culture audience. They make funny parodies, action-packed web series, and they film cool events and talented people to share with.

The name ComicWow! will be retained, but as ComicWow! Productions, which is reserved for select original content. As Sapphire Studios, the department will continue to facilitate and develop content for the following: Game Trade Media, PREVIEWSworld, Toychest, Free Comic Book Day (FCBD), Halloween ComicFest, and ComicWow! Productions. Our good friend international superstar, Ani-Mia is one of the hosts of Sapphire Studios. Subscribe to their Youtube channel.