On October 6, 2015, we're going to transform and roll out for Transformers: Devastation! Transformers: Devastation is an upcoming action hack and slash video game based on the Transformers franchise developed by Platinum Games and published by Activision. It is set to be released on Microsoft Windows, PlayStation 3, PlayStation 4, Xbox 360 and Xbox One. You'll be able to play as one of five Autobots: Optimus Prime, Bumblebee, Sideswipe, Wheeljack, and Grimlock as they battle against ​Decepticon forces in large 3D environments. Gameplay will include fast paced combos as well as the ability to switch between Vehicle and Robot mode. From watching the trailer Transformers Devastation looks like a Viewtiful Joe (Cell shaded) Dynasty Warriors (Open field hack/slash) Marvel vs Capcom (fighting combo / super moves) kinda game. The game is part of the Transformers: Generations line, though its visual design is most strongly inspired by the original The Transformers TV series. Several voice actors from the show, including Peter Cullen (Optimus Prime), Dan Gilvezan (Bumblebee), Michael Bell (Sideswipe), ​​Gregg Berger (Grimlock) and Frank Welker (Megatron, Soundwave), reprise their respective voice roles. The only downfall the game has are the lack of playable characters and it being a single player game. Hopefully this game isn't too expensive. So check out the trailer and tell us your thoughts about this upcoming game. Until next time true believers. 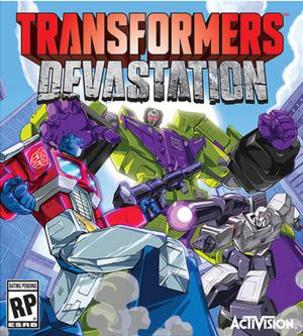