So we all noticed DC Comics adapts a lot of their comic story lines into animated films.

So here's our recommendation for a future animated adaption of course is Justice League / Power Rangers. was a limited six-issue series. It was an Intercompany Crossover, published jointly by DC and Boom! Studios. Round up the ultimate all-star cast and no better way to do that than with original Power Ranger actors themselves along with the Justice League TAS cast. For the people who haven't read this mighty morphin crossover yet here's a quick overview.

Plot:Lord Zedd attacks the Command Center with an army of Putties and Zack arrives to defend it and Zordon. During his attempt to teleport them out, the teleportation relay is destroyed by a fake Alpha 5 with a bomb implanted in him. This causes the teleportation to malfunction and send Zack, Lord Zedd and the Putties to cross dimensions, where a "Dark" and familiar figure witnesses their arrival. The Power Rangers teleport to the same coordinates Zack went to and end up stranded in the DC Universe, a world where superpowered heroes are an everyday thing and villains are almost as powerful as the monsters that Rita and Zedd create. End.

So now you have the gist let DC Comics know we all want this to happen. Also, if someone from DC is reading this making sure you switch the Dinozords to Thunderzords. Geekpin out. 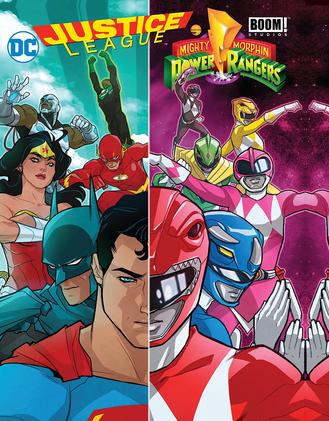