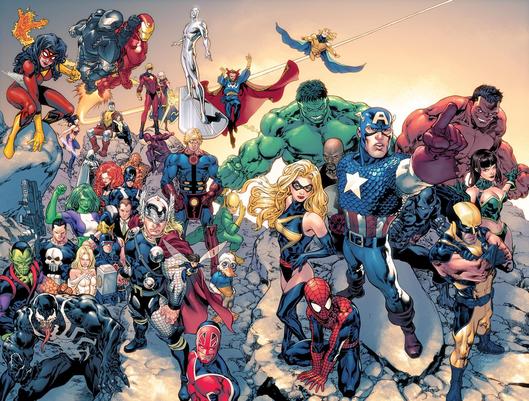 Greetings fellow geeks! Welcome to our newest original shenanigan content, "If I Ran Marvel Comics" (based on "If I Ran DC Comics"). Today's topic will be about the comics of Marvel. As we all know Marvel has too many comic titles especially if it's about the same character. Also, there's a lot of comic series that doesn't need to exist. So if I was running Marvel my consider would be quality over quantity. So here is a list of titles I would make and a guideline on how to keep readers interested.

Existing Titles That Needs No Change

Amazing Spider-Man, Guardians of The Galaxy, Daredevil, Venom, The Punisher, Miles Morales and Ms. Marvel are all fine where they are but can always be improved over time.

These strong main flagship titles that just need to go back to basics and grow from there.

The Avengers: In order to make this series work it needs 2 things.

1. It needs to be "Earth's Mightiest Heroes". The best and the strongest.

2. In order to make them "Earth Mightiest Heroes", we need the traditional roster,

Black Panther: I never cared for all the strong diplomacy and I think it's being used too heavily lately. The Black Panther needs a balanced mix of royalty and superheroness. Bring back the "jungle action" in Black Panther.

Captain America: Bring back Captain America to his boy scout patriotic ways instead of him being a fugitive every 2-3 years. Have him go on missions and adventures with Falcon and Winter Soldier.

The Worthy Thor: Hands down Thor needs a lot of action, top-notch art and keep the character simple but make his stories challenging. Think of him as Superman & Wonder Woman at the same time.

The Incredible Hulk: Pretty much gotta make the Hulk the same way as Thor but you can do more dramatic stories since Hulk is a tragic character.

Iron Man: Another character that needs to go back to his roots and rebuild for futuristic modern times.

Deadpool: The character who needs a reboot the most. I miss the good old days when Deadpool used to be considered a threat. Thanks to Daniel Way and all the series title writers after him making a goofy fucknut. Best Deadpool I read since Volume1 was Uncanny X-Force. So I recommend Rick Remender as the writer for Deadpool and recommend him written how he was in Uncanny X-Force.

I always felt like the X-Men exist in their own world. So I'm just going to talk about the mutants here. Using the method of the 90s, the X-Men worked best with 2 books with 2 separate teams. We'll use everyone's favorite X-Men.

New Mutants X: Fusing New Mutants and Generation X. When Jubilee is not on a mission with the X-Men you see her hanging with the New Mutants team, Cannonball, Magik, M, Armor and Synch.

Excalibur: Bring back the British superhero team. Since Psylocke is returning back to her own body she could become Captain Britain again and rally up the old gang like Nightcrawler, Kitty, Lockheed, Kylun, Pete Wisdom and Daytripper/Magik.

Wolverine: Have the ol' knucklehead going on random adventures and do the thing he knows how to do best.
Starjammers: Corsair, Hepzibah, Raza, Ch'od, Rachel Summers, Vulcan, maybe Havok and Polaris. Have them be space pirates going on adventures and looking for treasure. Make this a fun book anyone read can read.

"New" Titles I Would Have

Few of these titles I would be super stoked into reading.

The Menacing Spider-Man: This can be a fun comic. Basically, this will be a Spider-Man book from J. Jonah Jameson's point of view. This, of course, will take place before Friendly Neighborhood Spider-Man. I recommend Chip Zdarsky to write this.
Spider-Man & His Amazing Friends: Bring back a classic title with a new generation twist. Miles Morales, Nova & Ms. Marvel make the perfect team.

Secret Avengers: Pretty much a S.H.I.E.L.D. title. The Agents of S.H.I.E.L.D. will be the covert ops Avengers run by either Nick Fury or Maria Hill. Members so far will be Coulson (most likely team leader), Black Widow, Quake, Agent May, Mockingbird, Hawkeye & maybe Deathlock).

Adventure Into Fear: Another classic title! Bringing back Marvel's horror! Read random stories about your favorite horror-related characters such as Morbius, Man-Thing, Blade, Werewolf By Night, Where Monsters Dwell and more. With each issue or story arc will be by a different team of writers and artists.

Heroes For Hires: Marvel's street heroes Luke Cage, Iron Fist, Jessica Jones, Daughters of the Dragon & Hellcat banding together to protect their neighborhood. All these characters are great but strong enough to sell monthly titles.

The Defenders: One of the most interesting classic titles that I would bring back. Assembling

Doctor Strange, The Sentry and Captain Marvel as the new "Titan Trio"!

Silver Surfer: Simple character. Have him traveling the cosmos and finding himself in random troubled situations.

The Sorceror Supreme: Take away Dr. Strange's title. Give the title to another mystic being like Brother Voodoo, Clea or even Scarlet Witch. I think this would be interested for our "modern times".

Marvel Team-Up: Another classic title but doesn't need to be centered around Spidey or Human Torch like in the original. Have other Marvel characters we don't see often team up such as Night Thrasher and Daredevil taking on The Kingpin or some weird adventure with Deadpool and Death Head.

This is our little what if segment if we ran Marvel Comics / Studios...